You’re a Financial Planner, Now What? Be Ready for Disruption

Next Generation Planner: May 2021

Prior to the GameStop stock frenzy, Julia Carreon had attracted many critics who believed her calls to adapt to changing dynamics and investor behaviors were a bit overblown. After the Reddit hedge fund rush, though, many of those same critics were suddenly all ears. As a former digital adviser to large firms like Wells Fargo, she’d recognized the tension that was building between the old ways of serving customers and the digital culture of the new generation.

Julia recently spoke with me about the lessons learned from the GameStop rush, why the crisis was inevitable and how the profession can better prepare for the next generation of investors.

Through strategies like The Future of Advice, which she co-authored, and conversations around #GenZRising about the impact of Gen Z, Julia tried to warn the industry that an inevitable clash was going to disrupt centuries-old practices in banking, investing and advising. She pointed out a severe delay in tech innovation and urged firms to start bridging the gap. But her warnings were met with shrugs. No one believed that the internet would break the monolithic finance system—until it did.

While this event was unprecedented, Julia believes it’s simply the “opening salvo, the first sign that Gen Z and millennials are saying, ‘We’re here, and we’re absolutely determined to play the game differently.’”

She has compassion for the people who will suffer from the shakeup, but Julia also believes it was inevitable and may lead the entire profession—and the financial services sector in general— to a healthy evolution.

“It’s a pent-up generational turnover,” Julia said. “We have five generations in the workplace and market interacting right now.”

What Made the GameStop Disruption Inevitable?

What made these large firms that currently dominate the financial space so vulnerable to the Reddit rush? Simply put, she calls out their lack of response to the ever-accelerating pace of digital innovation.

When professionals think of the old, traditional legacy firms—the broker-dealers and the banks—they have customers locked in the terms of the services they’re providing. Unlike other industries, where the rise of mobile technology, e-commerce and digital media have caused substantial changes in the way they do business, the finance experience has remained stagnant.

Julia speaks of a friend who recently moved his brokerage account to a new firm.

“He had to print and sign 67 pages of paper, and then scan it all and send it to his financial account,” Julia said. “In this industry, that’s still quite normal. But try explaining that to my 15-year-old.”

In contrast to the aging “traditional” model, Julia calls attention to fintech, which is innovating at lightning speed.

“These young firms can stay nimble because they aren’t struggling with a complex IT stack, which incumbent firms have accumulated through decades of mergers and acquisitions,” Julia said. “What fintech lacks [are] the incumbents’ customers and scale.”

Because of that, they’re more able to innovate and adapt—while other firms are lumbering under their own weight.

Julia believes that in the end, the current firms’ hold on the market and the cutting-edge growth of fintech will need to merge. It’s more difficult than anyone can truly comprehend, she admitted, but it’s an important progression that we all must commit to if we want the profession to move forward and meet the next generation.

Generation Z, which includes people born between 1995 and 2010, has been a key focus in Julia’s attempts to predict how the generational turnover will impact finance. Together with millennials, Gen Z represents an enormous influence on the economy that is coming from a vastly different lived experience than baby boomers and Generation X.

Julia explains that each generation’s economic behavior is shaped by the major events that occurred in their formative years. For Gen Z, that includes the frequent mass shootings that started in 1999 with the Columbine High School shooting, 9/11, and The Great Recession, where they watched their parents go through the worst unemployment since the 1930s. And of course, the COVID-19 pandemic has added another layer to the crises and instability they have witnessed.

Another interesting piece of the Gen Z mindset is the presidency.

“Barack Obama is the primary president of their consciousness,” she said. “He was not only ethnically diverse but he was also known for social activism. So what you see in Gen Z is this really innate tendency for diversity, which hasn’t shown up in other generations.”

As a result of these realities, today’s young and emerging adults approach money in a unique way. Julia describes them as “hyper technology-focused.” She says that Gen Zers are very conservative with their money; they tend to be savers and are more entrepreneurial than millennials. All of that changes the traditional finance model, which most of us in the profession are still being taught.

How Can Advisers Bridge the Gap?

Julia’s advice for anyone in the profession is to open your mind and try to meet younger millennials and Gen Z where they are. One of the things she suggests is to consider the generation’s entrepreneurial side.

“How do you, as a planner, make them successful at their small business?” Julia posed.

Two years ago, the statistics already bore out that there were more Gen Z entrepreneurs than millennial entrepreneurs, even though Gen Z is half their age. She also calls out the condescension that has been directed at millennials from Gen Z.

“The number one thing that you don’t want to do is talk down to Gen Z the way millennials have been [doing] for so long,” Julia said. “You’ll lose them. Involving them with questions and perspective is the absolute way to win them over.”

It also helps to understand the generational gaps in costs of living, healthcare and benefits and so on. Unlike boomers, Gen Z’s financial circumstances aren’t a product of just their own decisions but shifts in the economy and society.

There’s another part to bridging the gap you may not want to hear: you’re going to need to make platforms like TikTok and other social media up-and-comers part of your business vocabulary. Don’t worry, though; that doesn’t mean you have to start doing embarrassing dances or going live 24/7. Instead, she encourages you to start thinking of these platforms as a way to listen to your audience and find ways to engage that make sense for you.

“If you want to be relevant, put your ear on the door of my 15- and 13-year-old boys, or even my 9-year-old, who wants to be a famous YouTuber,” Julia said. “Listen to how they are engaging on these platforms and figure out how to use that as a way to get your audience thinking outside their box.”

Part of mastering these social platforms will be knowing that your content is going up against some people who are giving bad advice. Figure out how to be the one making sense out of all the noise, because the circus isn’t going anywhere.

“People’s expectations are getting set by these platforms,” Julia said. “Reddit is a great example. It’s been trending on Twitter all week that Reddit is the most undervalued platform now on the planet in terms of influence. It’s fascinating.”

How Can Companies Stay Relevant in the Digital Age?

For firms, the challenge of adapting to these quickly evolving technologies can feel oppressive. However, ignoring them is no longer an option.

“Technology is not the disrupter, human beings are,” Julia said. “Over the next 10 years, we will witness the largest turnover of generations of our lifetime. I believe that we’ll have tectonic shifts.”

But in spite of many of the largest firms’ deep-seated inertia, she believes there’s still a way through. Julia recommends that firms—and the professionals who comprise them—protect their table stakes, or the strongest areas of their existing business. Focus on innovations that reduce friction in the client experience and find new ways to make it easy for clients to do business with you.

Her final note? Julia wants the profession as a whole—and new advisers, especially—to keep an open mind toward the next generations. Try to listen and empathize with them because their needs and expectations will shape the future of the work we do. It’s up to you to be ready. 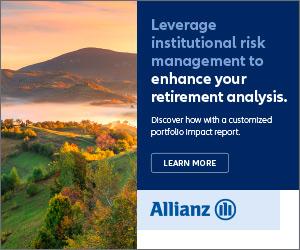 Social Security Claiming Strategies for Singles and Their Implications for Couples