AUDIO: Listen to the audio version of the article below.

Alexandra Armstrong, CFP®, is founder and chairman emeritus of Armstrong, Fleming & Moore Inc., in Washington, D.C. She is the co-author of two books and a regular columnist for BetterInvesting Magazine.

As this is my first column for the Journal of Financial Planning, let me introduce myself. After starting my career as a secretary at a regional NYSE firm in the 1960s, I obtained my license as a stockbroker and then became a CERTIFIED FINANCIAL PLANNERTM practitioner in 1976, one of the first females to do so, and started my independent financial planning firm in 1983 in Washington, D.C. Our firm now has four principals and 20 employees and manages just under $1 billion for 574 households. I was on the board of the International Association of Financial Planners (the predecessor organization to the Financial Planning Association) in the 1980s and became its first female chair in 1986. I currently serve on the board of The Foundation for Financial Planning and was its chair in 2000. I have co-authored two books with a psychologist: On Your Own: A Widow’s Passage to Emotional and Financial Well-Being and Your Next Chapter: A Woman’s Guide to a Successful Retirement. I recently retired from client management, although I am still involved to a limited degree with our firm’s management.

As you can surmise from my biographical information, I have been in this profession a long time. Bluntly, some would say I am old. That may be true, relatively speaking, but it also means I have had considerable experience working with clients during their accumulation and decumulation years. Just like you, I have found that while clients have many interim financial planning goals, their ultimate goals are to retire in comfort and make sure they don’t outlive their assets. In some cases, they want even more—that is, to make sure that they also can leave assets to their heirs.

Accomplishing these goals would be simpler for us financial planners if we could foresee how long our clients were going to live, how they would die (lingering illness or sudden death), what the stock and bond markets would do before and after they retired, how and when tax laws were going to change, and whether they would have to support not only themselves but other family members. As much as we would like to quantify these issues and many others, we have to admit that retirement planning is really more an art than a science.

Many planners much smarter than me (Bill Bengen, Jonathan Guyton, Michael Kitces, and Wade Pfau, to name a few) have come up with formulas based on past data for “safe” withdrawal schedules to help our clients retire in comfort. However, the fact is these calculations may or may not work in the future. All we can do is our best. The key seems to be making sure we keep in close contact with our clients, regularly reviewing not only their investments but also their personal situations. After all, as financial planners, we are much more than investment managers; we also are their family confidante and friend.

How Is Retirement Planning Different for Women?

The changing role of women. Over the past 75 years, the role of women has dramatically changed from one where the married woman managed the household and social calendar to one where she was balancing these tasks as well as a demanding job. Today, professional women, whether married or single, are facing some of the same issues men have primarily addressed with regard to leaving their jobs. Most men enter the workforce anticipating they will work for a certain number of years and then retire. Such has not been the case for women. Now, just as her male counterparts have experienced in the past, working women also are realizing that retiring is not just losing a paycheck. It can also mean losing their identity, recognition, purpose, and social network. In some cases, it may mean she may not want to retire at all!

Women live longer than men, so money has to last longer. According to the Centers for Disease Control and Prevention, as of 2018, life expectancy for men age 65 in the U.S. is 83 and for women it is 85.7. However, when you read the obituaries in the New York Times and The Wall Street Journal, you will notice many times that wealthier and better-educated people live considerably longer. This is often due to better medical care and less physical work—that and having a sense of purpose.

The Bureau of Labor Statistics indicates that at age 75, the majority of women in the U.S. are single—and at the same age, the majority of men are married. In addition, according to the U.S. Census Bureau, 20 percent of women live past age 90 and 80 percent of centenarians are female (stay tuned for 2020 Census numbers). That means women have to plan to make their assets last longer.

While women live longer, they may have accumulated less retirement assets. It has been well publicized that the majority of working women are paid less than men for the same jobs. In addition, they may take time off from working to raise children or care for family members. This means they may not have accumulated the full 35 quarters needed for full Social Security payments or other retirement assets.

Further, due to divorce or widowhood, they may be left with fewer retirement assets than they would have had if still married. On the other hand, some career women—particularly, single women who have not had the same financial responsibilities—may have built meaningful retirement accounts, which is a new phenomenon.

Women may not have as much investment experience. Many assume that today’s professional women are better educated about financial matters than women of previous generations. In our practice, we have found that, particularly for married working women, this may not be true. They are so busy balancing their careers with their household responsibilities that they are more than willing to delegate the investment process to their spouse. Single women usually have more investment experience—but not necessarily, particularly if their profession is all-absorbing and they aren’t that interested.

However, it’s important not to confuse a lack of knowledge with an inability to learn. This is an area where I believe we as financial planners have a major responsibility. I am always mystified by the oft-quoted statistic that says many advisers lose the female client after her husband dies. It has been my experience that if the adviser is careful to involve the wife in the planning process, the widow will remain a client. You need to make sure you ask the spouse to attend meetings and ask her opinion of issues. Often, you will find that her opinion differs from her spouse’s, but you won’t know unless you ask her. For instance, in our practice, we provide two copies of the financial plan—one for each spouse to review. We also give each client a risk tolerance questionnaire. As I am sure many of you have experienced, the results may differ greatly between the two spouses.

As financial planners, we tend to think of retirement planning primarily in financial terms. We will assume that you have prepared your clients to be financially ready for retirement, but that is only part of the picture. Are they ready emotionally for how their life will change when they retire? Retirement is a major transition and as much as clients might think they are prepared for how their lives will change, it is a major adjustment. Just think about it: all their lives, they have had an objective ahead of them. Completing their education, attaining their first job, getting married; buying their first home, having and raising their children, achieving some degree of success in their career, and accumulating enough money on which to retire—and then what?

Adjusting to retirement is a major transition that takes time, and people react to this change—for better or worse—as it is underway. Initially, people think of becoming a retiree. Then they begin to separate from the past and move toward the new role, for a while teetering between the two. For some, the process happens easily and quickly; for others, it might take years. In any case, it’s not an easy task.

My next column will focus on initial aspects of preparing for retirement, particularly from the woman’s point of view. 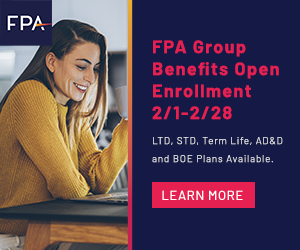 Fri, Feb 3, 2023
Virtual through Zoom
Advance your career with an FPA Membership. Become a member today